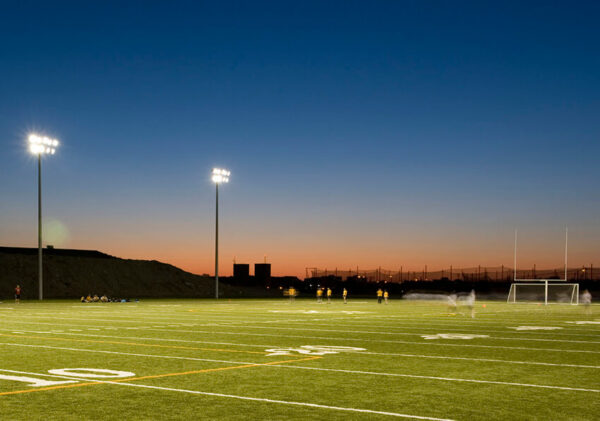 Stadium lights are exceptionally potent sports lighting that are placed at immense heights and have slender beam angles, which normally range between 12° and 60°. Smaller beam angles improve the lighting intensity letting the strong light to fall down from higher elevations.

Depending on the location, stadium lights can be put at a variety of heights. The height will affect the beam angles. A normal height will usually be between 40 and 60 feet, while a few may be mounted within 25 feet too.

These days’ people prefer to install a LED stadium light rather than various traditional lighting systems that were available so far. LED Light Expert can offer you the necessary guidance if you want to install such lights on your premises.

So, let us discuss in this post, the advantages that any LED Stadium Lights can offer as compared to traditional lighting.

An LED stadium light uses 10% – 20% less energy than what a halogen bulb would when used for the same amount of time, or until it burns out. This translates into significant electricity cost savings.

Perhaps the most frequently disregarded benefit of LED stadium flood lighting is safety.

When it comes to lights, heat emission is the biggest risk. Compared to conventional bulbs like metal halide, which convert more than 60% of the energy necessary to light them directly into heat, LEDs emit essentially little forward heat.

This indicates that only 40% of the energy consumed to power metal halide lamps is actually used to produce light. Additionally, LED stadium lights can function well on low-voltage electrical systems because they use less energy. These are typically significantly safer in the event of a problem.

In comparison to an ideal light source, the CRI (Color Rendering Index) measures how well light can reveal an object’s true color (natural light). A high CRI is typically a desirable quality. When it comes to CRI, LED stadium lights typically have very high (excellent) values.

Perhaps the easiest way to understand CRI is to compare traditional lighting options like sodium vapor lamps directly to LED outdoor stadium lighting, which has a high CRI.

Most halogen bulbs are substantially less bright than LEDs. In fact, you can get the same level of brightness with only 7 LED lamps as you would with 20 halogen lamps in a standard downlight.

At the same power usage, the lumen outputs of metal halide and LED can differ significantly. For instance, a LED stadium flood light of 400 watts emits light that is roughly equivalent to that of a metal halide of 1000 watts.

Since LED stadium flood lights consume energy more effectively than HID bulbs and convert more of it to light than either of the other two, they produce significantly less heat. When used in enclosed/recessed light fixtures, this is a huge benefit.

It is also a huge advantage when there is a lot of lighting being utilized in the past, the heat from the lighting would have altered the temperature in the room or indoor gym, increasing the demand for the air conditioner. Since LED stadium floodlights produce less heat, air conditioning usage is minimized in these conditions.

The environmental problems associated with conventional lighting systems like mercury vapor lights are not present with LED stadium lights.

These conventional methods require special disposal after the product’s useful life since they include mercury inside the lightbulb. These factors are not relevant when using LED stadium floodlights.

There is a large variety of correlated color temperature values for LED stadium lights. They come with a range of options, including a “warm,” yellowish glow, a “cold,” white light, and others.

Concerns have been expressed concerning how the electrical fields created by CFLs’ UV radiation may influence the indoor environment.

Those who are exposed to them for an extended period of time may experience health issues. In this regard, LED stadium lights are neutral, providing aesthetically pleasing lighting for interior areas.

Instantaneous lighting control is provided by LED stadium lights. As with metal halide lamps, there is no preheating phase. Furthermore, there is no device degradation as a result of frequent switching.

The operating range of LED stadium lights is almost the entire range of their rated power (0 to 100 percent). It should be noted that in order to dim, they do need gear particular to LED technology.

The fact that LEDs become more efficient when the power is decreased is a benefit of using them at less than full power. Additionally, the lifespan of the light itself is extended as a result.

With technologies like metal halides, which become less efficient at lower power levels and frequently cannot be dimmed at all, both of those benefits are absent.

The initial expense of buying the unit prevents extensive use of metal halide lighting. Unfortunately, the cost of any light bulb, maintenance, and electricity will make this sort of lighting far more expensive than LED lights used for industrial and commercial lighting.

The future of stadium lighting is LED illumination. Many of the major sports leagues have already started replacing the outdated HID lighting systems in stadiums with LED ones. By 2023, the stadium lighting market is anticipated to increase by more than 40% as LED lights take over the industry.

What Are the Benefits of Facebook Advertising for Your Business?

Different Types of Family Charts Used Commonly Around the World

Why Do Waterhog Mats Become Successive?

Seven Reasons Why UPVC Windows Are A Good Investment