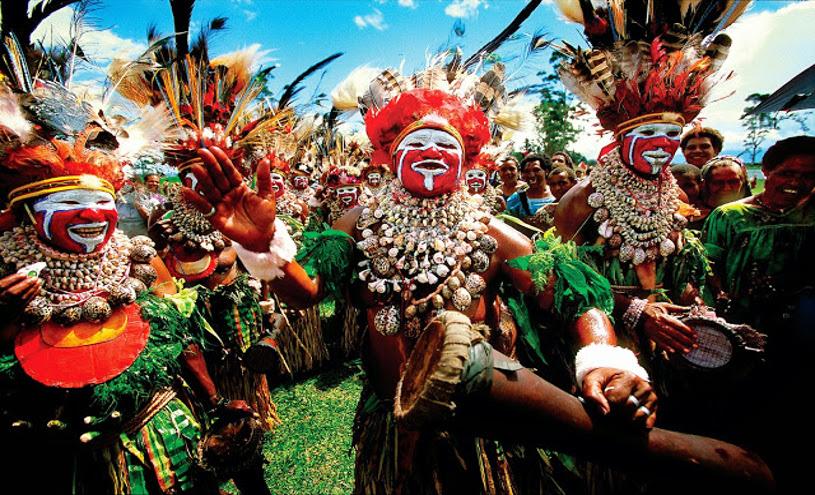 When choosing a country on the Oceania as an study destination, many students are filled with doubts about this mysterious land.

So, how about we explore Oceania together? Next, we explore the geography, history and economy, and tell you about some precautions you need to take during your study in Oceania there. Check out!

The term Oceania was coined by the French explorer Dumont d’Urville in 1831. Currently, it designates the smallest continent in the world, located in the southern hemisphere.

Oceania is formed by Australia and the Pacific Islands which, grouped together, make up Polynesia (which includes New Zealand), Melanesia and Micronesia. On the one hand, it is the smallest and (if we disregard Antarctica) least populated continent in the world, with 40 million inhabitants. On the other hand, it is the largest grouping of islands there is.

Oceania is made up of:

The small continent is home to the 6th largest country in the world by extension: Australia, which occupies no less than 90% of its nearly 8.5 million square kilometers.

Oceania was the last continent to be colonized by Europeans, with the annexation of Australia by the British in 1770. The English subjugated around 300 thousand native Indians. Domination was carried out by exiles and prisoners, and a small community of foreign settlers was established – who were mainly dedicated to livestock.

The discovery of gold in what is now the province of Victoria caused a population increase in the late 19th century. In 1901, Australia gained independence.

New Zealand, in turn, was formally occupied by the British Empire in 1840, and became a colony after the domination of the Maori population by the British in 1870. However, after the 1st World War, the region achieved its political autonomy.

Currently, the majority of the population of Australia and New Zealand is of European (especially British) origin and resides in urban areas. The main economic activity of both countries is the manufacture of high-tech industrialized products.

A curiosity about Australia is that more than 20% of its population was born in another country. In addition, it is considered one of the nations with the best quality of life and education in the world.

New Zealand, in turn, had its stunning landscapes revealed through a famous movie saga: the “Lord of the Rings” trilogy. If you don’t know, most of the movies were filmed in the small country. By the way, the production director, Peter Jackson, is from New Zealand.

The other islands of Oceania are inhabited mainly by populations of indigenous origin, who remain in rural areas. In these countries, the economy is essentially driven by extractivism, agriculture and tourism.

Oceania is a very rich continent, in cultural, ethnic and natural terms. With its mixture of different peoples and the meeting between beautiful untouched landscapes and advanced urban centers, it is a different land and still unknown to many.

Therefore, it is necessary to take some care when living in the country. Let’s find out what they are?

Much of Oceania has a very strong sun. It’s important to use sunscreen, even on cloudy days, and reapply it if you’re going to spend the day outside. And don’t forget to hydrate constantly!

During the middle of the day, in summer, it is good to be in the shade. So, a trip to countries like Australia requires, in warm seasons, lighter clothes, sunglasses and a hat or cap.

During these periods, the danger of forest fires should not be ignored. Staying informed about risk areas is essential! If you decide to camp, for example, respect the signs, use designated places for fires and always put out the fire when leaving the place.

Oceania has an exuberant fauna. As it is an isolated continent, it is home to some exotic species that can only be found there. Typical animals include the famous kangaroo, koala, platypus, tasmanian devil, kiwi and black swan.

It’s wonderful to be able to see such different and curious animals, but you have to be careful too. If you’re on a beach in Australia, swim between the flags, avoid straying too far from shore and don’t go into the sea at night. Thus, you avoid contact with sharks or the sea wasp, considered the most venomous living being in the world.

When walking through forested areas, opt for protective pants and shoes, as you may encounter a snake or spider. In big cities, you can also find arachnids (like the red-backed spider) and snakes, but just be careful with holes and debris and everything will be fine.

The kangaroo is the symbol of Australia, but be careful: if he feels intimidated, he can kick back. Far from the big cities, there are kangaroos loose in the countryside and on the side of roads, where many end up being run over. So be careful when driving!

Despite the frightening fame of the fauna in Oceania and these warnings, know that accidents with animals are quite rare there. Even the preservation of ecology is a very serious matter on the continent.

In Australia, for example, killing a wild animal (whether poisonous or not) can lead to fines and even imprisonment. If there is an animal threatening a person, it is taken by the authorities to another area. So remember to respect local laws and customs!

You can be sure that people will welcome you in Oceania! Australia, for example, is considered one of the friendliest countries towards foreigners – which has to do with miscegenation in the region.

However, it is clear that there are differences between the culture of Oceania and that of our country. Although quite receptive, Australians and New Zealanders are more reserved and do not deal with personal topics with whom they have just met, for example.

Always be very polite and courteous to Oceanians, without speaking too loudly and without interrupting the speech of others. Also, avoid touching your interlocutor, as this can seem too invasive to them.

Punctuality is also a highly valued characteristic in these countries, especially in the professional environment. Therefore, always be very careful with the schedule of your appointments.

When it comes to fun, Australians and New Zealanders love parties and beer, so it’s worth taking advantage of these opportunities to meet new friends. Two very popular sports on the continent are rugby and cricket – so don’t criticize or make fun of these sports which, for us, are still quite uncommon.

Did you like to know a little more about the culture of Oceania? It is a continent that deserves to be discovered during your studying in Australia or New Zealand, as it holds many charms, riches and possibilities. If you have any questions or want to tell us about your experience in the countries of the region, leave a comment!

Jaundice – what it is and how to prevent it

Get The Probability Assignment Help To Solve The Assignment

What Do College Admissions Look For in an Essay?